Atlanta — The Atlanta Housing Board of Commissioners voted Wednesday to negotiate with a development partner to embark on an ambitious path to create a vibrant, mixed-use community that includes affordable and market-rate housing, office, retail, hospitality, education and open space in Atlanta’s historic Civic Center site.

Atlanta Housing CEO Eugene Jones Jr. thanked AH board members for devoting the time and attention necessary for their decisive vote. “The board’s informed and decisive action allows AH to immediately enter into negotiations to finalize the proposed business and legal terms in order to enter into a Master Developer Agreement,” said CEO Jones.

“The vision for this development has the potential to infuse $1 billion into the Historic Old Fourth Ward, providing thousands of Atlantans from all walks of life with endless opportunities,” said Atlanta Mayor Andre Dickens. “The project will also honor the legacy of Buttermilk Bottom by embracing the site’s rich history, while preserving the Performing Arts Center and transforming the site into a true civic anchor at the heart of a new livable and equitable community.”

To achieve the vision for the Civic Center site through a public-private partnership, AH released a Request for Qualifications for development partners in August 2021 and a Request for Proposals in November 2021 to RFQ respondents with the capacity and capability to execute a large urban, multi-phased development. The Civic Center Evaluation Committee included representatives from the City of Atlanta, Invest Atlanta, the community and AH staff.

Following the June withdrawal of a development team, the Evaluation Committee again analyzed, interviewed and negotiated with the respondents to unanimously recommend the joint venture team of The Republic Family of Companies, The Michaels Organization and Sophy Capital for the redevelopment of a 14.7-acre portion of the property to include the Exhibition Hall. The board also authorized the selected team to play a role in the master planning and potential development of the Plaza and Performing Arts Center.

The development team’s plan calls for a multi-phase, 10-year development that will transform 14.7 acres of the city’s center into a mixed-use, mixed-income community with a focus on inclusivity, sustainability and affordability. Key elements of the plan include paying tribute to the past while building for the future; creating a neighborhood-focused, inclusive development; establishing pedestrian connectivity and public green space; utilizing sustainable and socially responsible design; offering educational and cultural programming; offering a thoughtful retail mix to stimulate activity and the environment, and re-connecting the street grid to the surrounding area to re-integrate the site.

“We’d like to thank the Atlanta Housing staff for their tireless efforts in getting this project off the ground,” said acting AH Board Chair Tené Traylor. “Because of their hard work and community outreach, AH and our new partners will deliver hundreds of affordable new units to needy Atlanta families and breathe new life into the old Buttermilk Bottom.” Added Commissioner Larry Stewart, “This is a tremendous opportunity for AH and our new partners to work collaboratively to serve those in need. We are also very proud that this project will preserve the important memory and legacy of Buttermilk Bottom.”

The Development Team’s $575-million investment will create 1.8-million square feet of residential, office, retail, and hospitality and cultural spaces, as well as a new school. In addition to affordable and mixed-income housing, the plan includes a grocery, rooftop gardens, open spaces and recreational areas, as well as a civic square and outdoor space for local food.

Under the redevelopment proposal, AH will fully recover its $41.7 million cost of acquiring the property over a 99-year ground lease.

AH and the Development Team will begin negotiating a master development agreement immediately to finalize business terms and final due diligence.  We expect to have a signed agreement within the next six to nine months with construction to being in late 2023.

ABOUT THE CIVIC CENTER

Completed in 1965, the new Civic Center complex represented a bold effort to establish a civic and iconic home for the arts in the heart of Atlanta.  The Civic Center first opened in 1967 and served as the first truly integrated entertainment venue and convention center in Atlanta, hosting local, regional, and national performances and events until its closure in 2014.  Over its active lifetime, the Civic Center grew into a legendary cultural and community hub for all Atlanta, hosting multiple mayoral inaugurations including Mayor Maynard Jackson and Mayor Shirley Franklin; annual Atlanta Public School graduations; several years of Black Entertainment Television awards and concerts with greats like Ray Charles; countless memorable performances like Broadway shows such as the Lion King and the Wizard of Oz, and provided studio space for Steve Harvey’s television program, Family Feud.  The Exhibition Hall, known as SciTrek, hosted numerous exhibits and travelling shows.

The Civic Center complex includes a 4,600-seat Performing Arts Center with 5,800 square feet of ancillary meeting space and an Exhibition Hall featuring 125,000 square feet of open area and 50-foot-high ceilings over a 200-ft. wide column-free space.  Both buildings’ entrances center on a formal plaza and fountain that continue the tradition of cultural institutions serving as both an iconic landmark and public amenity for urban residents. 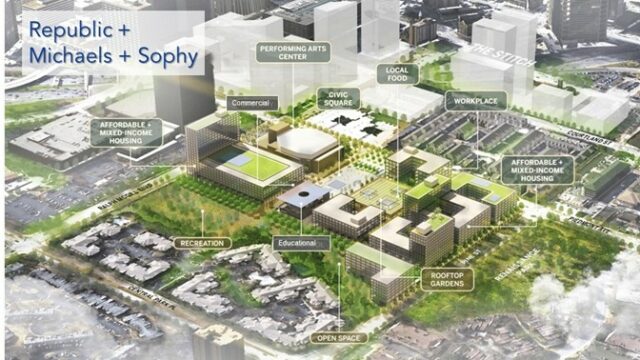 Led by President and CEO Eugene Jones, Jr., the Housing Authority of the City of Atlanta, Georgia (AH), is the largest housing authority in Georgia and one of the largest in the nation. AH provides and facilitates affordable housing resources for nearly 27,000 low-income households comprised of approximately 45,000 people. These affordable housing resources include AH-owned residential communities, AH-sponsored mixed-income, mixed-finance residential communities, tenant-based vouchers, project based rental assistance, supportive housing arrangements and homeownership opportunities. AH’s programs are funded and regulated by the U.S. Department of Housing and Urban Development.