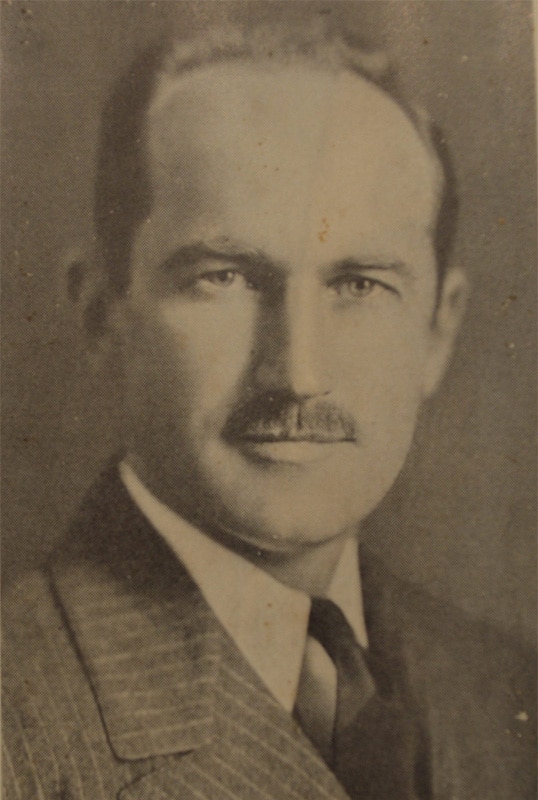 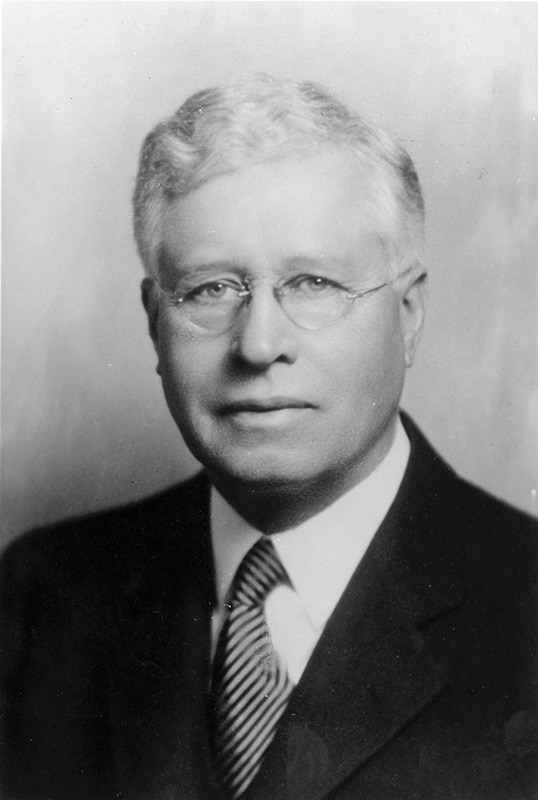 Charles Forrest Palmer was a successful Atlanta real estate developer. He passed by the slums of Techwood flats on his way to work every day. Of his daily commute, he said: “I always moved a little faster here, for ugliness was packed close on either side: crowded, dilapidated dwellings, ragged, dirty children, reeking outhouses – a human garbage dump - a slum. Why such an untended abscess should fester between the lovely campus of our proudest school and the office buildings in the heart of our city never consciously entered my mind.”

When President Roosevelt’s Public Works Administration offered 3 billion dollars on construction projects, including low-cost housing and slum clearance, Palmer saw an opportunity to wipe out slums and enhance property values. His quest, which initially began as a solid business project, quickly evolved into what he described as a “civic” obligatory. Palmer instantly thought about the Techwood Flats area. According to Palmer’s report, there were nearly a thousand white families living in Techwood Flats. The residents were working poor, prostitutes, and thieves who could not afford rent in decent housing. The wooden houses were nearly 50 years old. “In the rear were pools of stagnant water near an open privy serving several families”

In 1933, Palmer began to draft a plan for Techwood Flats clearance and redevelopment. With Thorne Flagler, a builder and Flip Burge, an architect, Palmer drew plans and developed a cost estimate. Next, he organized the Board of Trustees. Among members recruited by Palmer were Clark Howell, senior publisher of The Atlanta Constitution, Dr. M. L. Brittain, president of Georgia Tech, and Herbert Choate, president of the Atlanta Chamber of Commerce. Atlanta Mayor, James L. Key also offered his support.

At the same time, Dr. John Hope, first black president of Morehouse College, envisioned a public housing project on the site of the Beaver Slide, a slum area next to the university campus. With the help of O. I. Freeman, civil engineer and W. J. Sayward, architect, Hope drafted a plan for clearance and redevelopment of the community.

Dr. John Hope was an influential educator and pivotal Civil Rights leader. He was steadfast in his support of public education, adequate housing, health care, and job opportunities for African-Americans. During his last few years of life, Hope worked closely with Palmer to come up with a solution to end Atlanta’s festering slums and rid the area near Morehouse College of blight and despair.

Dr. Hope contacted Palmer who helped to apply the Techwood Homes model to the planning of University Homes, a public housing project for black families on the site of Beaver Slide slum. Dr. Hope became chairman of the Board of Trustees.

The alliance of these men served to create the first federally subsidized public housing in the United States under President Roosevelt’s New Deal: Techwood and University Homes. In October 1934, construction of Techwood Homes began. On November 29, 1935 Franklin D. Roosevelt dedicated the project. In his dedicatory address, Roosevelt said:

“Within sight of us today, stands a tribute to useful work under government supervision – the first slum clearance and low-rent housing project. Here, at the request of citizens of Atlanta, we have cleaned out nine square blocks of antiquated, squalid dwellings, for years a detriment to the community. Today these hopeless old houses are gone and in their places we see the bright, cheerful buildings of the Techwood Housing Project. Within a very short time, people who never before could get a decent roof over their heads, will live here in reasonable comfort amid healthful, worthwhile surroundings…”

On September 29, 1934, Harold Ickes blew up the first of the buildings to be demolished in the Beaver Slide area and construction of University Homes began in the spring of 1935. On April 15, 1937, the first families moved into the project.  Oscar Banks, a retired railroad worker, and his wife were the first tenants. The housing project consisted of 42 buildings with a separate entry and a small plot of land for each apartment, 675 housing units in total. Like Techwood, the University Homes apartments also featured hot and cold running water, electricity, steam heat, closet and storage space, and modern kitchen appliances.

Creation of the Atlanta Housing Authority

The Housing Authority of the City of Atlanta was formed May 18, 1938, by the Atlanta City Council. Its first board of commissioners met on June 11, 1938 chaired by Charles F. Palmer.

Over the years when the agency developed and operated public housing projects, the primary purposes of AHA were:

At the beginning of its operations, Atlanta Housing Authority conducted surveys to determine the areas of most need of slum clearance, the rent amounts that the low income families could afford, and the sizes of families in need of sanitary and safe housing. The clearance sites selected by AHA were the city’s worst slum areas. 89 percent of the houses in the slum areas were built before 1915. 79 percent of the units lacked either an inside bathroom or inside running water or both.

During World War II the focus of public housing shifted from low-income housing to housing for defense industry workers and war veterans.  Atlanta, like most American cities, experienced a massive influx of civilian workers seeking jobs in defense industry, increasing the need for policies that addressed urban housing needs for these workers and their families.

In 1943, AHA signed an agreement with the War Housing Center, the National Housing Agency, and the Federal Public Housing Authority, the successor of USHA. Under the agreement, migrate war-workers qualifying under the local housing authority’s regulations would be placed in Techwood and Clark Howell Home units.

In her article for The Techwood News,  “Moonlit Blackout,” Nellie Ingersoll wrote of the regular surprise blackouts that were held at Techwood and Clark Howell Homes: “First Aid Workers rushing to their posts and one thinks, ‘these people, in their hands do the very lives of our neighbors lie—they have prepared themselves, they know they will be equal to the task when it comes.”

There were approximately 2800 Victory Gardens kept by tenants in the AHA housing projects raising as much as $10,000 worth of food. Canning and preserving were taught since the opening of AHA’s housing projects and these efforts were intensified with AHA supplying “under leaders” to assist in food preservation. Tenant funds supported the Girl and Boy Scouts’ wartime related activities. Nurseries were created to help project mothers employed in war work. At the end of the war, the Atlanta Housing Authority also operated temporary housing for war veterans in 1945 at the end of Grant Street in Atlanta’s first ward.

Atlanta Urban Renewal Program began in the middle of the 1950s when the City of Atlanta delegated its redevelopment powers to AHA in September 1955. Thus, the program was administered by the Atlanta Housing Authority and financed primarily by the Federal Government.

The goal of the Atlanta Urban Renewal Program was to eliminate slums and blighted conditions in designated areas of the City of Atlanta. AHA acquired and cleared the blighted areas, and then sold the land to private enterprises for new development. The authority also helped the owners to upgrade, improve or rehabilitate their properties by providing financial and technical assistance. AHA provided for new schools and parks, roads, streets, sidewalks and sewers in the revitalized areas, as well as developed new low rent housing units. Private investors developed new residential and office buildings, hotels and commercial centers. Homeowners made necessary repairs and cleaned up their properties.

Congress in 1968, provided funding for selected renewal initiatives and required citizen participation in those activities. NDP closed out in December 1979. As of 1980, the remaining projects were completed under Community Development Block Grant Program (CDBG).  On January 31, 1981 urban redevelopment powers were transferred from AHA to the City of Atlanta.

Public Housing for the Elderly

“The elderly are of great concern to the Atlanta Housing Authority. Indications are that they will continue to be so for several reasons. Their numbers are increasing, their incomes are low, they are hurt by spiraling costs, and they are least able to bear extra expense if relocation is necessary.”

Antoine Graves Highrise, adjacent to Grady Homes project, was opened in November 1965. It was the first multi-story, elevator-equipped low-rent apartment project for the elderly built in Atlanta. The highrise, designed by Edwards and Portman, featured a large atrium. This open space within the building helped to keep the apartments cool during summer. The atrium became a signature feature of John Portman’s works, such as Marriott Marquis and Westin Peachtree Plaza Hotels in Downtown Atlanta.

In the 1960s, due to the federal legislative changes, AHA gradually abandoned racial segregation and on June 30, 1964, Jesse Blayton, a former member of the Negro Advisory Committee to the Atlanta Housing Authority was appointed to the AHA Board as its first black commissioner. Prior to joining the AHA Board, Blayton had been successful as a bank entrepreneur, a college professor, and a radio pioneer. Blayton participated in a lifelong commitment to his own vision for creating a better city and in aiding the civil rights movement.   Probably most recognized for his achievements in radio, Blayton became the first black radio station owner and operator in the United States when he founded WERD-AM in Georgia on Oct. 3, 1949. The 1,000-watt station was located in the Prince Hall Masons Grand Lodge at 334 Auburn Avenue. WERD was a pioneer in programming what he called "Negro appeal" music, playing early versions of rhythm and blues music that could not be found elsewhere on the air.  WERD also diverged from other local radio stations in the early 1950s by publicizing the emerging civil rights movement.  The station's location in the Prince Hall Masonic Lodge Building, which also housed the headquarters of the Southern Christian Leadership Conference (SCLC), no doubt gave it a particular advantage.  Dr. Martin Luther King, Jr., President of SCLC, often walked upstairs to the WERD studio to make public statements about the organization’s activities.

The first of the Homeownership and Opportunity for People Everywhere (HOPE) programs was created by Congress in 1990. HOPE I, II, and III provided planning and implementation grants to promote ownership of public housing and certain multifamily rental units and single family homes by low-income families. The last program in the series, HOPE VI, originally called Urban Revitalization Demonstration (URD), was created for the purpose of comprehensive revitalization of severely distressed public housing developments.

Moving to Work (MTW) is a demonstration program established in 1996 by Congress and administered by the U.S. Department of Housing and Urban Development (HUD), giving certain "high performing" public housing agencies the flexibility to design and test various approaches for: (a) facilitating and providing quality affordable housing opportunities in their localities, (b) facilitating opportunities for family success and self-sufficiency, and (c) achieving greater efficiency and effectiveness. AHA received its MTW designation in 2001 and executed its MTW Agreement with HUD on September 23, 2003, the initial period of which was effective from July 1, 2003 through June 30, 2010. AHA and HUD negotiated and executed an Amended and Restated MTW Agreement, effective as of November 13, 2008, and further amended by that certain Second Amendment to the Moving to Work Agreement, effective as of January 16, 2009.

In 2004, AHA submitted to HUD its first Business Plan, using this new statutory and regulatory framework (herein referred to as the "Business Plan" or "CATALYST Plan"). AHA's Business Plan and its subsequent annual MTW implementation plans, on a cumulative basis, outline AHA's priority projects, activities and initiatives to be conducted during each fiscal year.